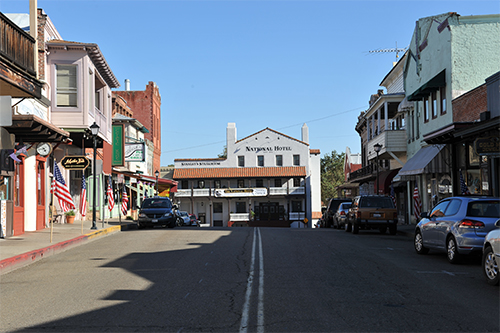 One of California’s original gold mining towns, the city of Jackson is located in the heart of California’s historic Mother Lode, 45 miles east of Sacramento and Stockton. Settlement of the region by American pioneers was stimulated by the discovery of gold in the Sierra foothills around 1848. Jackson, named after Colonel Alden Jackson, was a gold mining camp built around a year-round water spring, and continues to thrive today as the largest city and center of culture and commerce in Amador County.

Jackson blends the ambiance of a gold rush-era downtown district and Victorian era neighborhoods with modern subdivisions and shopping centers. Nestled in the Sierra Nevada foothills, church spires and oak tree-covered hillsides lend to the community’s rural charm. Among the many sites that draw visitors to Jackson are its historic main street, the Jackson Rancheria, the Jackson Pioneer Cemetery, and vibrant Gold Rush history.

Jackson’s history is firmly entrenched in California’s Gold Rush. From early 1850 until WWII, Amador County’s three main mines, the Eureka, Kennedy and Argonaut mines produced more than half the gold mined in the Mother Lode. The Argonaut and Kennedy mines have shafts that drop over 5,000 feet into depth of the Mother Lode and are reported to be the deepest mines in North America. On August 27, 1922 47 miners became trapped when a fire broke out in the Argonaut mine. All 47 men died in the fire but it wasn’t until over a year later that the last body was recovered. Sadly, the Argonaut mine incident was the worst gold mine disaster in U.S. history.

Jackson became the county seat of Amador County in 1854. Visitors will find a brass plaque set in the sidewalk of Main Street in the historic downtown area that claims; “Judge Smith proclaimed Jackson the seat of Justice after Clerk Collier canvassed the votes of the May 1851 election in which 1,224 votes were cast for Moquelumne Hill and 1,014 for Jackson. An armed party from Moquelumne Hill pursued Judge Smith to lynch him. Another party stole the records from the Clerk’s office. Later Judge Smith shot and killed Collier on Main Street over another disputed election count. A perfect example of Mother Lode politics.”

As many as 42 Civil War era buildings are still standing today on and around Jackson’s Historic Main Street and there are many such plaques adorning the sidewalks through this historic area for visitors to enjoy by exploring on their own, or on one of Jackson’s unique Plaque Walking Tours.

Jackson’s location in the beautiful Sierra Nevada foothills offers a wide array of outdoor activities such as camping, hiking, biking and fishing for nature lovers, and a rich history lovingly preserved for history buffs. A few locations people love to visit in the area include:

One of the best things about Jackson of course, is the great variety of log homes in the area. The community is filled with beautiful log homes, friendly people, and a wide variety of activities for either adventure-seekers or those looking for a peaceful, scenic and historic getaway.

California has a lot of great communities filled with every shape, style and size of log homes. We’re lucky to work with homeowners throughout the state who trust us for restoring, repairing and building the log homes and structures they love. From great lodges in the north to cozy weekend getaways in the south, we get to see it all. In addition to this article about Jackson, we’ve also shared insights into other log home-friendly communities including Grass Valley, Kirkwood, Sonora, Bear Valley, Mammoth, Pine Mountain Club & Frazier Park, Truckee, Lake Tahoe, and Santa Cruz.

We hope this inspires you to visit this beautiful mountain community. If you decide to purchase a log home in the Jackson area, or already own one and would like an appraisal, tips for maintenance, or general advice for keeping your home in good condition, please call our California log home construction and restoration experts at 877-477-6564, or email jon@prologrestorations.com.

FAQs for choosing the right stain for your log home