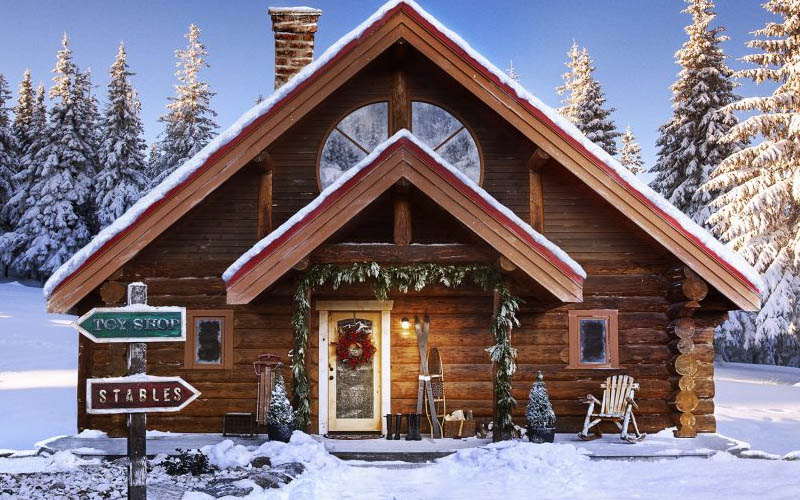 Previously on our blog we featured some of the oldest log homes in America. While researching, we found some pretty unique log homes and crazy ones, too, that we just had to share. From lodges built over waterfalls to famous hermits to even Santa’s residence (it’s on Zillow!), you’ve just got to see these.

For fans of the 90’s TV series Twin Peaks, this place might look familiar. The Salish Lodge & Spa was featured prominently throughout the series as the place where lead character, FBI Agent Dale Cooper, resided. Referred to as “The Great Northern Hotel” in the show, the Lodge is situated in a stunning setting overlooking Snoqualmie Falls, just 30 minutes east of Seattle and Bellevue, in Washington State. Originally called The Snoqualmie Falls Lodge, it began as an eight-room log structure built in 1916 as a rest stop for travelers. It quickly became famous for its Farm Breakfast, which nourished visitors before they journeyed over the mountain pass. In 1988, the building was completely remodeled and reopened as The Salish Lodge. It is now owned by the Muckleshoot Indian Tribe.

The Father of Gonzo Journalism, and well-known writer of the 20th century, Hunter S. Thompson’s cabin in Colorado is where his spirit lives on. The house is a two-story log cabin, with “many, many rooms,” says Anita. “A specific count is not advisable, as Hunter had some of them built off the grid.” The rooms are jammed with books, art, vinyl albums, memorabilia and Hunter’s words—his handwritten notes are everywhere. In addition to a flock of free-range peacocks, Owl Creek is home to chickens, a German shepherd and two Siamese cats, Caesar and Pele. “The cats were Hunter’s babies,” Anita says. She built what she calls a stone “labyrinth” (a sort of rock crop-circle maze) on the spot from which Hunter’s ashes were shot out of a cannon. “With fireworks,” she recalls. “Hunter loved explosions.”

Just an hour away from Spokane, WA and Coeur d’Alene, ID, Buck Quarter Ranch is one of the most extravagant (and expensive) and unique log homes you’ll find in the United States. It’s for sale, in fact, if you’ve got a spare $22 million on hand. It was built between 2004 and 2005 from kiln dried Montana logs on a massive concrete and steel foundation, with 5 bedrooms and a heated four car garage. It also comes with 900 acres of pristine Northeastern Washington land, a 12,000 square foot main house, an spa pavilion for year-round swimming and relaxation, a classic log cabin, a 2,800 square foot guest house, a 1,300 square foot caretaker’s house, helicopter pad and fully equipped 6,800 square-foot shop with several outbuildings and equipment shelters.

Where is Santa’s House? The North Pole – and Zillow!

Did you know that there is a listing on Zillow for Santa and Mrs. Clause’s log cabin home in the North Pole? File this one away for the holidays to bring out and show the kids – proof that Santa, reindeer, elves and all are located up North exists on Zillow. OK, it’s a mock listing, but it’s really fun and a great one to check out. According to Zillow, the home was built in 1822, has unique features like a Santa’s Toy Workshop, Reindeer Stables, River Rock Fireplace and Sleigh Parking Garage. It sits on 25 acres, allowing an ideal setting for “spirited reindeer games.” For those who love to bake, one of its most exciting attributes is an oven that offers 12 different cookie settings and serves them directly to the dining room table. This is one of the most unique log homes around!